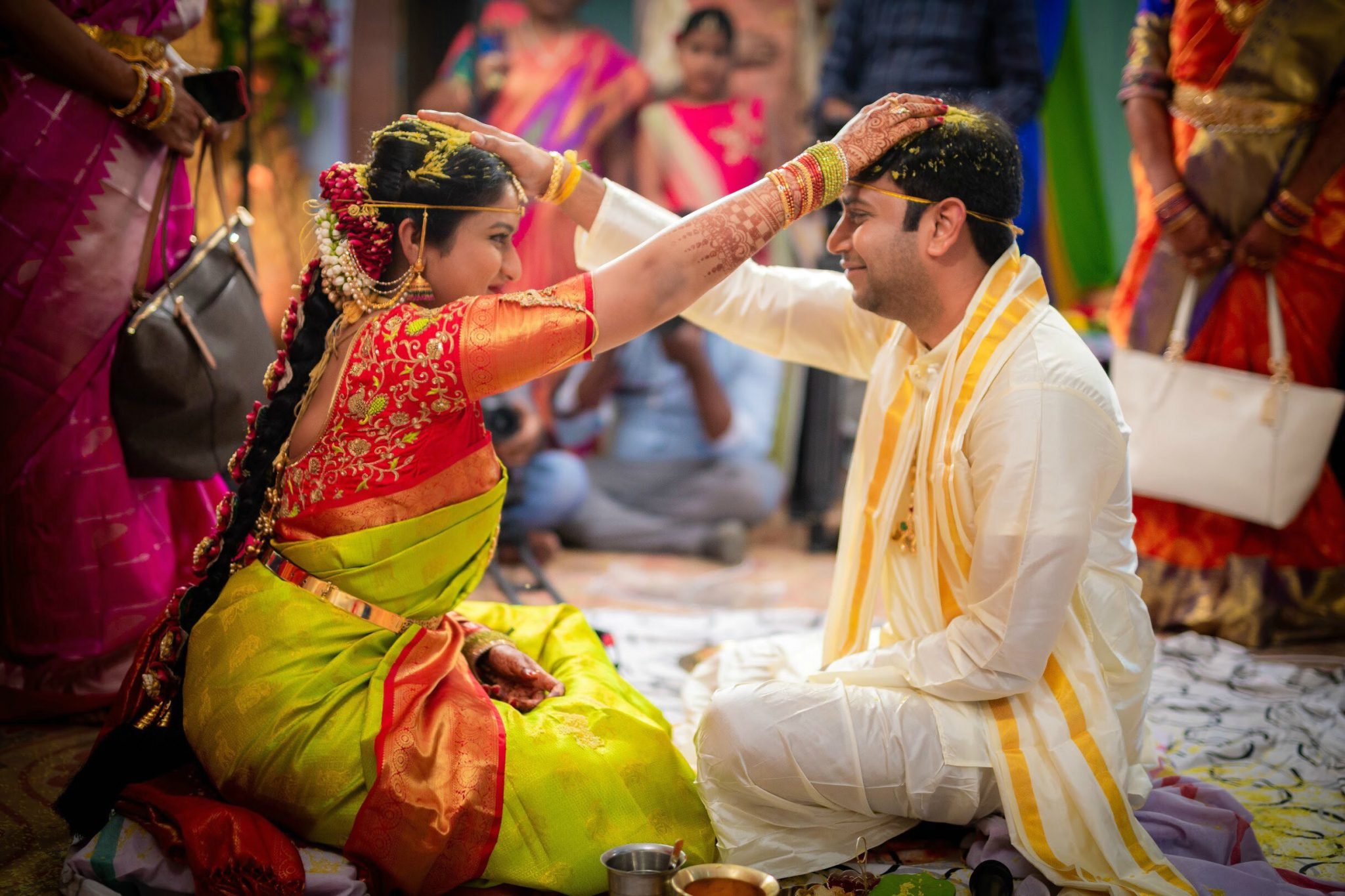 Telugu Wedding ceremonies are vibrant, detailed & colorful festivities full of meaning and tradition. Like all Hindu wedding ceremonies, the events aim to culminate with the physical, spiritual, and emotional union of the couple. There is also a heavy emphasis on the new bond between the two families and the celebration of their journey together.

This ceremony is performed to officially declare that the bride and groom are going to be married. An auspicious date & time (Muhurtham) for the wedding is decided. After this, the couple exchanges the rings and the mother-in-law of the bride gives jewelry, clothes and silverware to the bride as blessings.

Pellikuturu's ceremony takes place one or two days before the wedding day at the bride’s place. In this ritual, naluga (paste of flour and turmeric) with aromatic oils is smeared on the body of the bride which is followed by a holy bath with turmeric water to cleanse the body and mind before the sacred ritual of becoming one (the wedding).

Pellikoduku ceremony takes place one or two days before the wedding day at the groom’s house separately. In this ritual, naluga (paste of flour and turmeric) with aromatic oils is smeared on the body of the groom which is followed by a holy bath with turmeric water to cleanse the body and mind before the sacred ritual of becoming one (the wedding).

(‘Mangala’ means holy, ‘Snanam’ means bath). This ceremony takes place on the morning of the main wedding when the groom and the bride are taken for ceremonial baths. An auspicious time is decided for the ceremony. After the bath is over, the bride and the groom are dressed in the first set of wedding and can now carry out the other rituals.

In the olden days, brahmin boys were sent away to sages to learn the scriptures. When they returned, they had to perform Snathakam, which signified that their education had ended and that they can now take on more responsibilities like starting their family.

Kashi Yatra is a fun ritual where the groom pretends to leave for Kashi to renounce worldly pleasure, the bride’s brother stops him and convinces him to marry his sister. When the groom agrees to marry, he is welcomed by the bride’s parents.

Ganesh Pooja is the first thing that takes place in the mandap. The groom has to take part in the same. This pooja is performed so that the wedding goes well without any hindrances as well as for a happy and prosperous married life.

Meanwhile, the bride offers prayers to Goddess Gauri who is the symbol of fertility, the triumph of good over evil, and motherhood and the would-be bride seeks her blessings.

The bride is accompanied by her parents and family to the venue. In some traditions, the bride is seated in a straw basket and is carried to the mandapam by her maternal uncle. Until the Jeelakara Bellam ritual is complete, the bride and groom are not supposed to look at each other hence a curtain is placed between them called Terasala (‘tera’ means screen)

This ritual is performed by the bride’s parents where after washing the groom’s feet, they offer their daughter’s hand to the groom. The groom promises to love, respect and protect his bride for life.

‘Jeelakara’ means Cumin and ‘Bellam’ means Jaggery in Telugu. The ritual starts by placing Cumin and Jaggery paste on the hands of the couple. The time for this ceremony is very vital and takes place at the most auspicious hour. At the exact muhurtham, the couple places this paste on each other’s heads, moving their hands above the curtain. This ritual indicates that the couple will stick together through the bitter and sweet phases of life.

After the curtain between the couple is removed, the groom ties the sacred yellow thread smeared with Haldi around the bride’s neck with three knots. This signifies their mental, physical and spiritual union with each other.

This is the most fun part of the wedding. The pandit chants mantras and the bride and the groom shower each other’s heads with talambralu (pearls, thermocol balls, or rice colored by turmeric paste).

After this, the groom puts a silver toe ring on the bride’s toe.