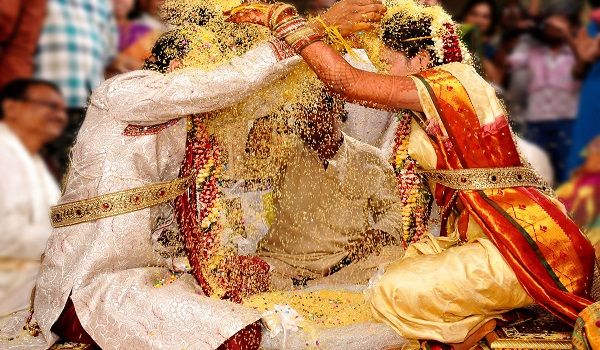 Weddings in the state of Karnataka are mostly simple affairs, focused mainly on traditional rituals and less pomp and show. Kannadigas prefer to adhere to age-old traditions when it comes to weddings. The rituals vary slightly in different regions and among various communities of Karnataka, but the basic structure of the entire event remains the same. Kannada weddings are relatively short and share many rituals with neighboring states like Maharashtra and Andhra Pradesh. Kannada weddings generally take place during the daytime and are comparatively short 1-2 days events. Given below are the wedding rituals of a Kannada wedding.

A few days before the wedding, the Naandi ceremony is performed in both the bride and groom’s places. It is a puja performed by the family priest to ensure that the wedding ceremony goes without any hitches or problems. A traditional copper pot or Kalash filled with holy water is placed with a coconut on top, and this marks the beginning of the wedding celebrations.

This is a fun-filled ritual when the groom pretends to get angry that no one is searching for a suitable bride for him. He threatens his family that he will set out for a pilgrimage to Kashi carrying a walking stick, a dhoti, an umbrella, a fan, and edibles like a coconut along with some rice. As he is about to leave the house, the groom’s maternal uncle stops him and convinces him not to leave and puts forward the girl that had been chosen for him.  The groom relents hearing this and decides to come back home to get married to his bride. The groom dresses up in a white veshti or dhoti worn in typical south Indian style around the waist. The wedding attire of the bride is highly ornamental. She wears a traditional 9 yards long Naavari Saree. They wear green glass bangles along with the saree and are similar to Maharashtrian brides in this respect.

In Hindu traditions, the groom is considered to be the reincarnation of Lord Vishnu. In that respect, he is worshipped by the bride’s party. He is accompanied to the wedding mandap by his future father-in-law and is asked to a seat of prominence. His feet are then washed by the bride’s father and a puja is performed in his honor. He is also presented with a set of silk dhoti and scarf known as pitambar. He is to take part in the wedding rituals wearing the clothes presented to him by the bride’s parents.

A nuptial knot is tied between the ends of the bride and groom’s attires signifying an unfailing bond established between two souls. The couple then circumambulates the sacred fire seven times; this ritual is termed Saptapadi. Through these circumambulations, the bride follows the groom and together they utter the seven sacred vows of marriage. After the Saptapadi the couple sits down, with the bride sitting on the groom’s left, and the groom ties the mangalasutra around the bride’s neck assisted by five Sumangalis or married women. This officially concludes the wedding, and the couple gets up and goes over to seek blessings from the elders of both families.