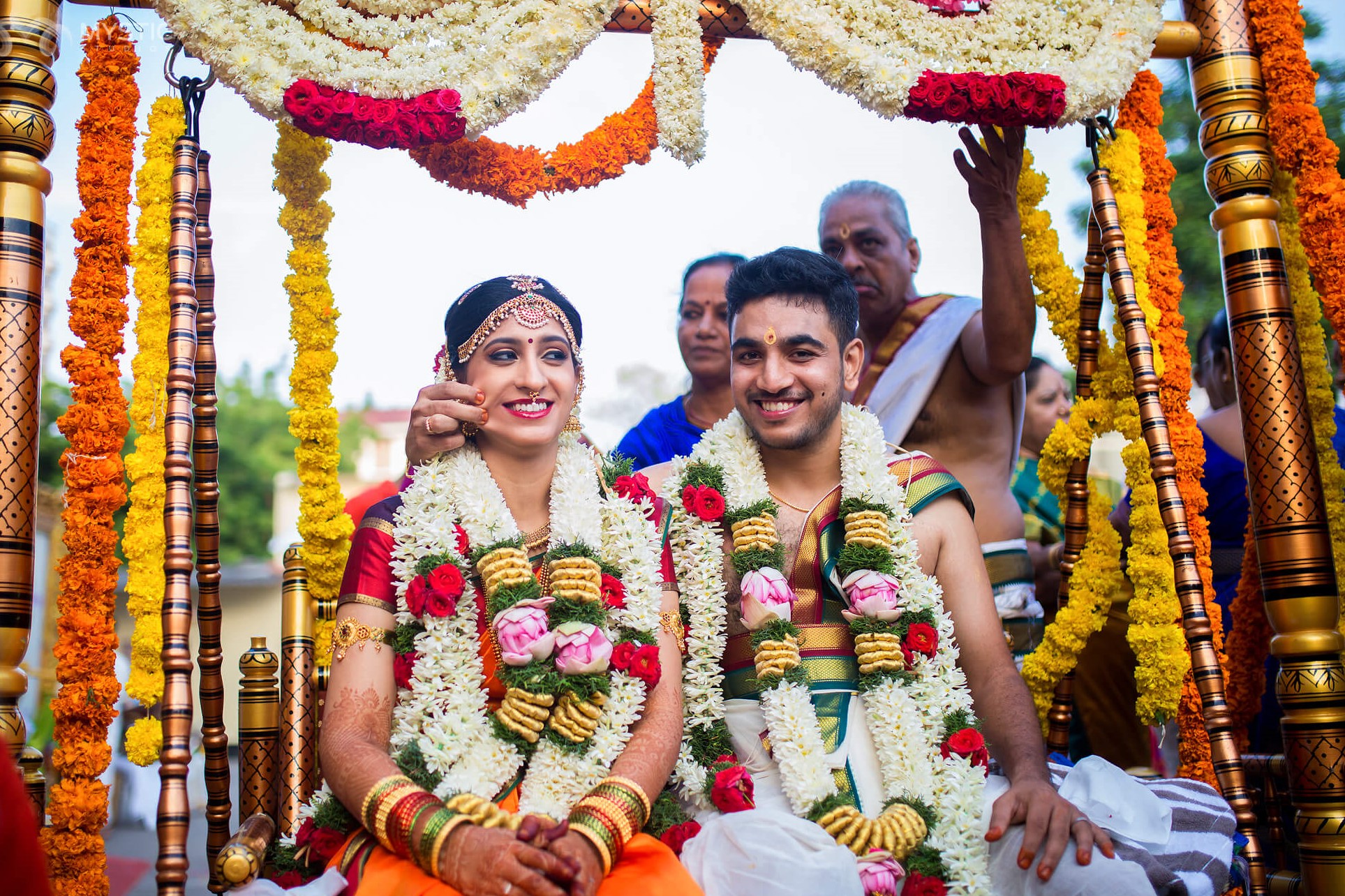 An inviting food jugalbandhi with pristine and polished banana leaves, the crackling Dolby effect of the very pompous nagaswarams, festoons overhead of mango leaves that never fade, Mamas and Maamis clad in Panchakachams and Madisars scurrying around like beautiful Gandharvas... VANTHANAM. The bride’s parents wait outside the marriage hall with coconuts, flowers, and Thamboola with two conical structures called ‘Paruppu Thengai Urundai” (made of Dhal, jaggery, coconut) to receive the groom and his family for the wedding.VIRATHAM

The main part of the wedding starts with ‘Viratham’.

From hereon, the groom prepares himself for his new phase of life as a ‘Grihastha’.

Or the ‘Maapilai Azhaippu’. A pooja ceremony happens at a temple nearby, and then the groom is taken on a procession to the mantapa to accept the bride. The procession these days is in a car, but in the olden days, the procession used to be (sometimes) on elephants (gasp). The Januvasam is to ‘show’ the groom to the public, and allow them to voice their objections if any, to the marriage.

After the recitation of Vedic verses, the groom, all well clad in Panchakancham, starts his journey towards Kasi (Varanasi) to expand his knowledge of Brahman. The groom sets off towards the gate, with his slippers, a bamboo fan, and an umbrella. The bride’s father stops him on the way, convinces him of the importance of being a ‘Grihastha’, and also promises to give him his daughter as his companion to face the trials and tribulations in life.

The Maternal uncles lift the Bride and the Groom respectively to their shoulder levels enabling for easy exchange of garlands. While thrice they exchange, fun is also added making garlanding one another difficult. The couple is then made to sit in an oonjal (swing), lots of songs are sung, and the bride and the groom are served with paalikai (a mixture of banana, milk and sugar) by women from both families. The women also prepare rice balls with turmeric, and circle them around the couple. The rice balls are thrown in all four directions to ward off evil spirits. The groom is then asked to hold the right hand of the bride and lead her to the marriage dais.KANYATHANAM The bride is made to wear the Madisar or the ‘Koorai Pudavai’ and is made to sit on her father’s lap facing eastward. The groom faces westward and ties the mangalyam around the neck of the bride. “Getti melam”, the bride’s uncle would say and this signals the nagaswaram and thavil artists to speed their tempo up. A total of 3 knots are tied around the bride’s neck. The first knot tied by the husband formalizes their union, and the second and the third knots are tied by the groom’s sister to symbolize the welcoming of the bride into her family. Sapthapadhi The bride and the groom now hold hands and pray for their eternal happiness. The groom also helps the bride to take seven steps around the sacred fire, and this ritual is called the ‘sapthapathi’. This is the most important part of the marriage ceremony, and only after the sapthapathi are the bride and groom ‘officially’ married.